Jan Rohlfing – born in 1964 – was raised in a very musical family. His father beeing a business man but very much into art, music and pianoplaying, influenced his son in an early age by listening and playing to a lot of Jazz and Rock at that time. The jazz piano player George Maycock was a good friend of the family – so Jan got the chance to play with George by the age of 6 and was tought hands on by Georg ´Drummer Big Owen Fletchit Champbell and his upright bass player Ali Haurant. 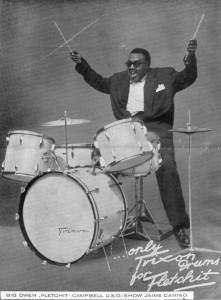 Jans first regular teacher Herwig Mitteregger – Spliff and Nina Hagen – tought Jan the first real steps of Rock and Pop Music with the background of a classical musican. Parallel to drum, Jan got piano lessons and was encouraged to play his own small compositions and melodies in front of an audience. Later on during elemantary school, Jan took lessons with Sigfried Kolbe at musicschool Düsseldorf and was herby trained in the art of European drum study (Agostini, Keune, Hofrainer) but also under the influence of Jazz at home and from Mr. Kolbe who was a great Jazz fan as well.

However, Jans first bands in the home base area played Jazz Rock, Fusion and some Funk music in the style of Wishbone Ash, King Krimson, Averadge White Band, Earth Wind & Fire, Rare Earth, Bloods Sweat & Tears, Mahavishnu Orchestra and last not least Frank Zappa. One of the first bands in his hometown was with Hans Steingen at the piano who is still very activ in the music scene or Oliver Kehls who nowadays is a very popular producer of commercial music.

Still at highschool, Jan composed, produced and played various trailors for example for industrial companies such as Hoesch, MBB as well as TV commercials and an international jingle for the European Journal broadcasted by the Deutsche Welle all over the world.

After Jan graduated from school, he went to Cologne to study industrial economy for a couple of years. However his desire for music and drums and the fact that he was heavily engaged with a lot of bands, made him decide to interrupted his studies and start a new professional study of drums and music in the USA.

After finishing a quite popular band project and recording with the South African band „The Reespect“, Jan went to the Drummers Collective in New York for the certificate program and afterwords to the Musicians Institute of Technology – PIT in Los Angeles to get the best possible education in contemporary drumming at that time.

This time in New York and Los Angeles changed Jans life and layed down the foundation of his future career.

At that time he was able to take lessons and beeing influenced by many great musicians such as Joe Porcaro, Ralph Humprey, Steve Houghton, Kim Plainfield, Frank Malabe, Joe Diorio, Efrain Torro, Gary Willis and many more. He was very activ in playing in every style and also learned from the passion and lifestyle of the professional music scene. He played with Jeff Andrews, Leni Stern, Luis Conte, turned out to be a good friend and budy of Mike Clark (Herbie Hancock) and Frank Malabe (various Latin) and took private lessons with Peter Erskine, Rod Morgenstein or Gary Chaffee to name a few.

Jan graduated with a certificate in New York and a vocational with honors in Los Angeles and also was winner of the Zildjian Drummers of the year.

After coming back to Germany he founded the Drummers Institute beeing the first affiliated drum school of the Drummers Collective wordwide. While running Drummers Institute, Jan was trained and educated and absorved the styles of friends, guest faculty members or clinicians who came to his school such as Simon Phillips, Terry Bozzio, John Riley, Adam Nussbaum, Billy Cobham but also studied more in depth with Frank Malabe who was going to write another Latin book with Jan beeing the co-author.

Parallel to Drummers Institute and other various musical projects, Jan started his career as a drummer in the scene. He played with more Rock and Soul projects, like Denise Brookes, Wallenstein, Peter Bursch, Rosani Reis, Valary Simons and many more and began his career as a theatre and musical drummer.

In 2009 Jan expended Drummers Institute and founded the Band-House including a recording studio, forty rehearsal rooms as well as three fully equipped rehearsal studios (with P.A., guitar-, bassamp, drums and keyboards) that can be rented by the hour.

For more than two decades, Jan played in nearly every musical show that was shown such as Starlight Express, Cats, Rocky Horror, Jesus Christ, Evita, City of Angels or Black Rider – Jan even played classical percussion for example on Phantom of the opera. For ten years, Jan was a member of Stage Entertainment which was one of the most successful musical production companies in Germany – with the show „Elisabeth“ as a first premiere.

After more than 20 years of theatre work and 25 years of Drummers Institute, Jan cut down his busy work schedule with more than 300 gigs per year to get more freedom and freshness for new projects. One of this being his own recording studio – Sound Lab Production – build at his home.

At Sound Lab, Jan records and produces a lot of different music such as playbacks that are used at Drummers Institute, playbacks that are used for his wifes string classes, drum tracks for pre-produced CD-recordings of other artists, drum tracks for guitar books (P.Bursch, A.Scheinhütte) and last not least, Jan is finaly free to produce his own music or self-written arrangements.

After releasing his first CD-production in 2015 – „Wort & Musik“ with the actress Alicia Fassel and the cello player Eva-Susanne Ruoff presenting poems of Else Lasker–Schüler, Erich Kästner, Rose Ausländer and Tanja Trog, Jan was asked to produce an exclusive feature about the poetress Rose Ausländer. Therefore Jan composed the music for extended chamber orchester including pinao, string quintet, brass and drums. designed the whole dramaturgy and did the full production at his SLP studio. After its presentation on the Frankfurt book fair in 2017, the CD was voted by the hr2/ARD „Bestenliste“ number 1 for beeing the best new production 2018 on the marked. I was also nominated for the „Preis der Deutschen Schallplattenkritik“ and – besides of the original publisher Griot Verlag – was also publishes by the renowned Büchergilde Gutenberg.

Since 2018 Jan is organizing a special series of concerts called U6 – music – art & literature, which is a combination of a concert and art exhibition. For this event, he is inviting his musical colleagues and friends to perfom in front of a selected audience. In this context, he has foundet his own musical project called „JR&Friends“. Besides of his basic band (Pascal Schweren-piano, Bernd Zinsius-bass; Jürgen Schuld-percussion), he presents special guests such as Elmar Frey (sax), Soleil Niklasson (voc), Mathias Haus (vibes) or Christian Kappe (trp).